The Ancient Egyptian belief was that the hieroglyphics could come alive, so in order to avoid the inscriptions in her pyramid to be ineffective/ risk them losing their power, all animals were written in an unusual way to prevent them from coming alive and escaping.

Some examples are given in the quotes below:
‘An interesting observation concerns the treatment of the hieroglyphs. They are carved as normal signs, but later the legs of the birds were scratched out. In the Thirteenth Dynasty, hieroglyphs on objects placed in the tomb chamber were often incomplete. The legs of birds are missing, the ends of snakes are not depicted, and human figures are avoided. The movement of living creatures was evidently seen as potentially dangerous for the deceased. The preparation of Neferuptah’s burial in her father’s pyramid evidently occurred at the time when these new hieroglyphs were introduced.’
From: Grajezki W.,2014, Tomb treasures of the Late Middle Kingdom: the archeology of female burials, university of Pennsylvania press.

‘The Egyptians’ hieroglyphic writing system was a combination of pictographic and ideographic symbols along with a few that were alphabetical. Among the symbols or ‘letters’ were those in the shape of an eagle, chick, owl, crane, lion, dog, snail, frog, fish, snake, and so on. The Egyptian belief in the inherent magic in these letters was not obscured by the mists of time. It was clearly expressed, for example, in the hieroglyphs of the pyramid of Princess Neferuptah. The daughter of Pharaoh Amenemhet III (who ruled 1842-1797 B.C.), she lay in state in a room one of whose walls was covered with the customary description of the importance of the deceased royal person. Archaeologists who first came upon these writings were surprised to discover that, of the letters forming the testimonial, all those represented by creatures were mutilated, lacking appropriate limbs,wings or tails…The Egyptians fear that, when all the people had left the pyramid and the doors were sealed, the letters would come to life and the fish swim, the birds fly, the animals run and the text be lost. The text had been too important to the princess and to posterity for any chance to be taken. They crippled them all so none would escape and the text would remain forever intact.’
Quote taken from M. Drogin and cited in: Bosmajian H., 2005, Burning books, McFarlan&Co.

I couldn't find a nice pic of the tomb wall itself for you to see those hieroglyphics (I would love to see them myself!), so in the meantime here is her famous offering table: 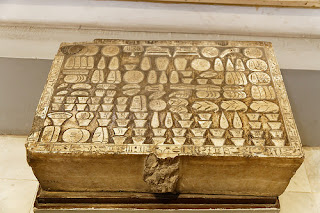 where it all begins...

welcome to my blog, which will be added on randomly and in no particular order. This is a place for me to research and reflect on my lifelong interest and love for all things to do with Ancient Egypt. I have finally taken the plunge and started a course in Egyptology, one in Ancient Egyptian magic and decided to start learning hieroglyphics (which I have been wanting to do for a long time).

I have several pinterest boards, which also get updated as and when i visit places of interest or notice things which I want to know more about. You can find them there:
pinterest boards


so here we are, my journey home begins... 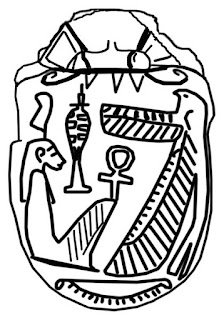